Catalonia’s human tower tradition is on show in New York city, where the Castellers de Vilafranca have displayed their technique. On Wednesday, one of the most renowned ‘castellers’ groups offered three performances in the heart of Manhattan, gaining the attention of several American media such as ‘The New York Times’.

That evening, from a rooftop on Fifth Avenue, the Castellers de Vilafranca built a human castle 8 levels high, each level formed by a ring of 4 people. In fact, Catalan human towers consist of a base, formed by several concentrical circles of people all pushing towards the centre, and then, on top, several layers of people standing with their feet on the shoulders of the person they have below. This way these towers might be of six people standing one on top of the other, or seven, or eight, or nine, or even ten, reaching 15 or 17 metres high.

Catalan ‘castells’ are the highest human-formed constructions in the world. Furthermore, the technique allows for many sizes and types of castle. Besides the number of floors, the number of people per floor can change. Some are only formed by one person per level (except the base) and they are called pillars. Others are formed by rings of two, three, four, five or even nine people. Some can even host a hidden pillar in the middle or look like being several towers in one. In addition, the tallest towers have secondary bases located on the second level, or even on the third level, in order to make the construction more stable.

In New York, the Castellers de Vilafranca did not build their most spectacular and difficult creations, but they offered a taste of what they can reach. And it was the first time ever that Catalan human towers were built in the United States. They offered a performance in the morning, another in the afternoon and a third in the evening. 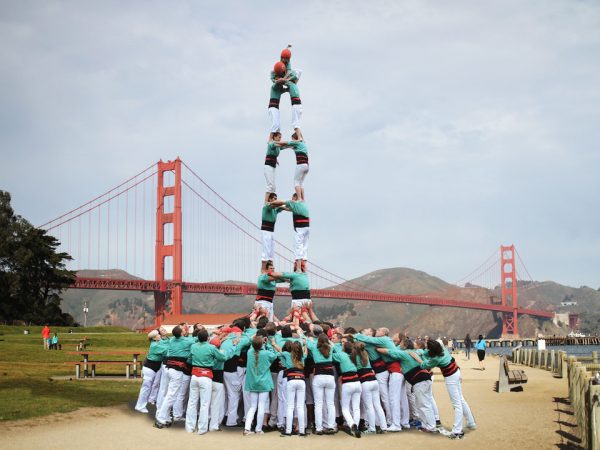